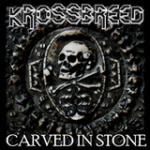 Tracklist:
1. Legacy
2. Leave You Bleeding
3. Carved In Stone
4. Right Where It Belongs
5. Means To An End


KROSSBREED signs a deal with, UK based, Casket music for the release of "3 cheers for the misery". The release is planned for may/june.
The original release was completely engineered and mixed by the band. The reached a great result with their aggresive sound but there were some glitches. Casket Music gave them the chance to correct these. So the Casket release will be released as the "upgrade 6.66 edition". Check the songs out on the bands myspace and facebook.
greetz