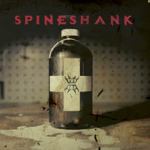 We're going to have to get one pre-conception out of the way before this review can truly commence: yes, Spineshank is a nu-metal band. And, as logic would dictate, Self-Destructive Pattern is a nu-metal record. I'm not really a fan of this new (now somewhat old to tell the truth, and fading fast) breed of metallic perception, but there are some bands that played nu-metal well and distinctly. Slipknot comes to mind. That's about it. Spineshank is the type of group that will never make it, in the sales sense of the term. The unit is not only too derivative and embodies every nu cliché (and I do mean every in the purest sense of the term), but Spineshank is also about three summers too late on this sound: Self-Destructive Pattern would have been gloriously in sync with pop culture circa June, 2000. Anyway, the fact that I have chosen to complain before lavishing praise on Self-Destructive Pattern is my disclaimer in a sense -- even though my locks were long ago shorn into spiky, mallcore jagged edges, I don't espouse nu-metal pseudo-cathartic principles (cuz, like, catharsis ain't coming from Korn. It's coming from Ulver). However, I'm digging this 2003 Spineshank record on levels I never thought possible; not only does it rock, metallize and groove, but the band has taken all these individual influences I find cool and has seemingly distilled them into one sound. Firstly, I'm aware that previous works by these dudes always featured some synthy-industrial presence. On Self-Destructive Pattern, however, that element is turned up, KMFDM style. And, added over that revved-up blip are chunky, huge, catchy, anthemic riffs that stick in your mind long after the intial turmoil of the record is done. That's not to say this is album a flawless exercise. Far from it, in fact. The break-downs apparent in every song are not only redundant, but clone-ish, as every nu-metal band pulls that trick ad-nauseum. Furthermore, the angsty noose-riddled lyrics remind solely of 15 year old males angry at their parents for not extending curfew past 11. But, amidst the over-done bits comes a band that has achieved festive-perfection, in that Self-Destructive Pattern's multi-faceted appeal comes from both black, brooding nights and those sun-drenched house parties you notoriously remember (or, conversely, can't remember) from high school. Somewhere, somehow, Spineshank coulda been the underground's version of '80s glam. Oh, the horror?